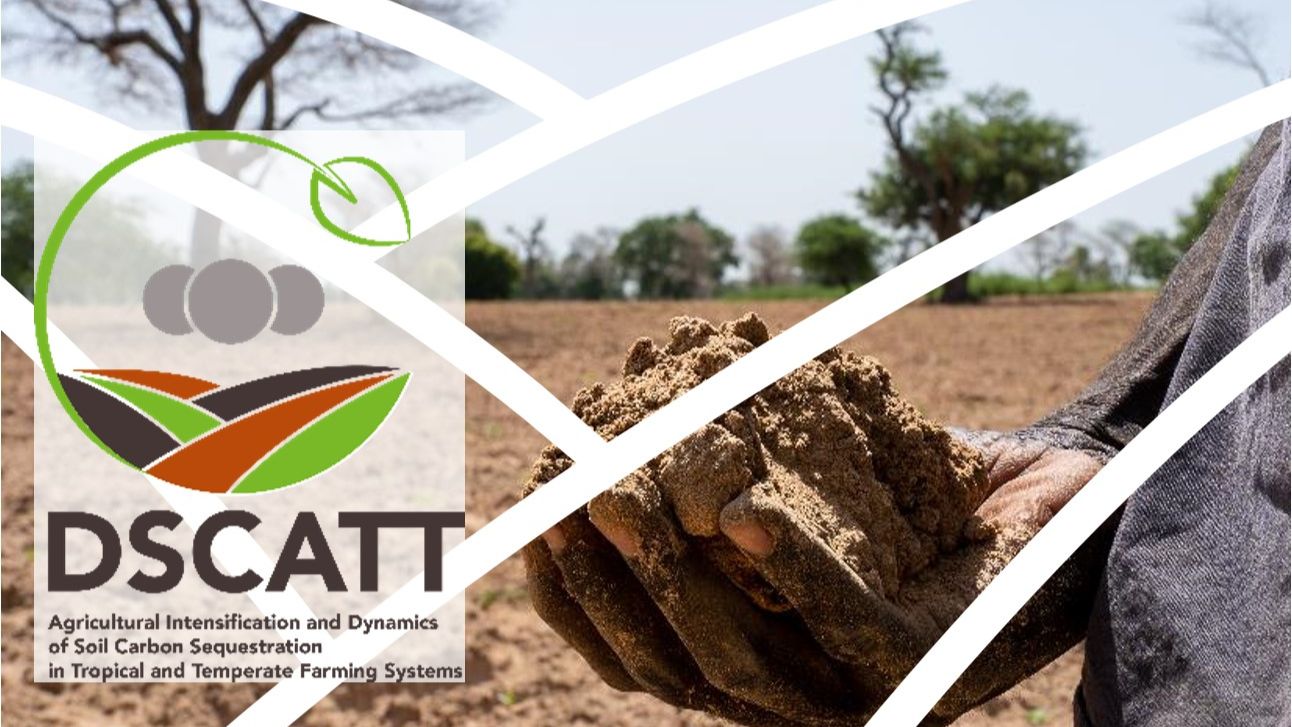 The project newsletters below

The objective of this project is to design and test a participatory device, made up of methods and tools to surround the process of co-construction of models as well as co-exploration of models (scripting) by a multiplicity of actors heterogeneous. The starting point is the identification of heterogeneous actors in terms of their scale of intervention and their objectives, having to co-exist on the same territory. Upstream, one of challenges is to allow these heterogeneous actors to participate in the design of the model according to their own points of view, to better understand the functioning of the territory that they share.

The fair is an opportunity to present the diversity of solutions on which the "4 per 1000" partners are working, to demonstrate the power of the network and the "4 per 1000" platform to support the implementation of the European Green Deal, to identify opportunities for collaboration and, above all, to stimulate the team spirit of our collective action. 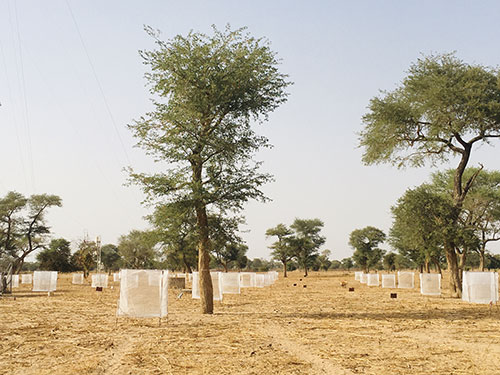 An experiment was set up by Khardiatou Sadio (ISRA PhD student in the DSCATT project) on the Faidherbia Flux site of Sob on the Niakhar Population Health Environment Observatory. It is dedicated to the quantification of tree litter in the Faidherbia albida tree park. One hundred traps were placed every 10m. 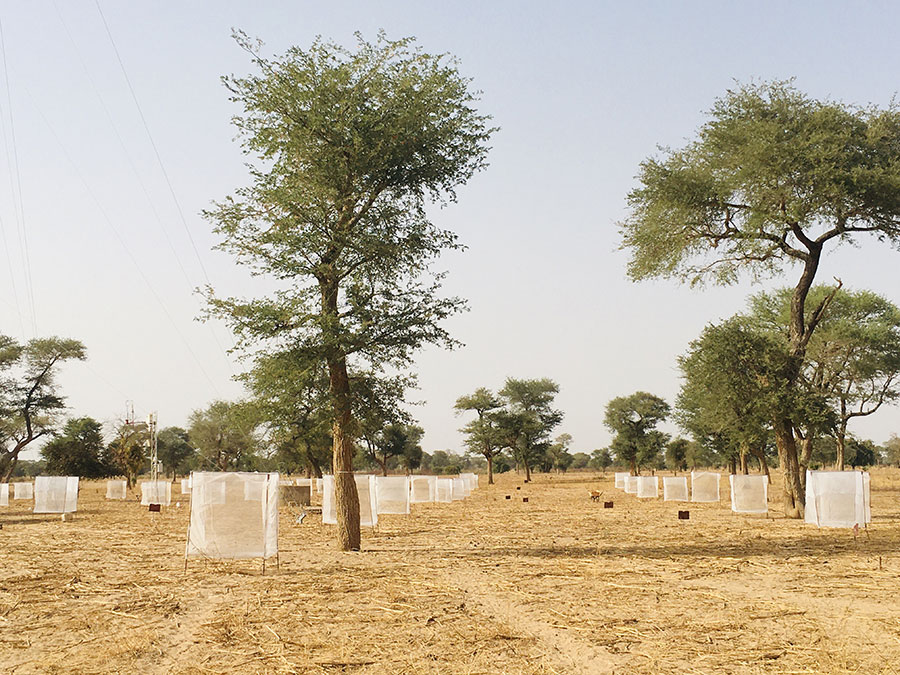 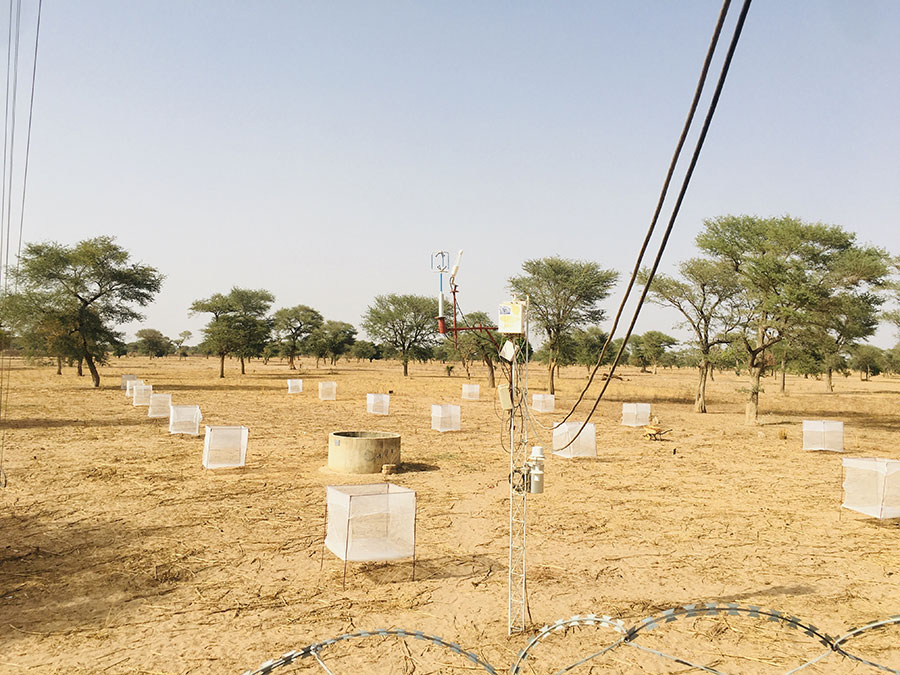 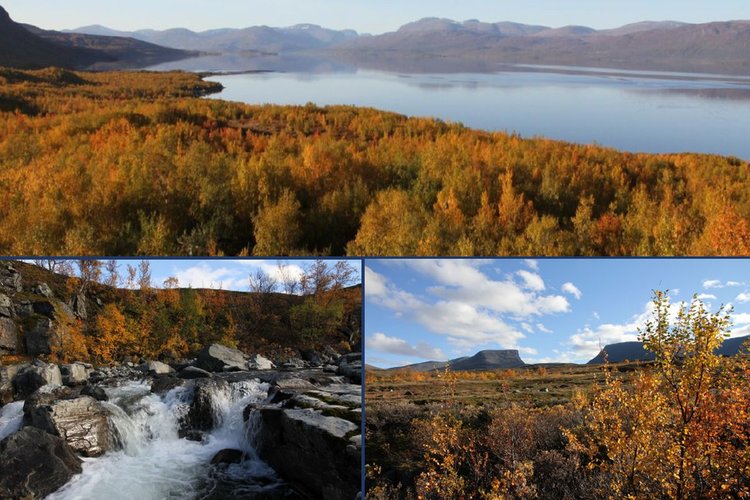 An interdisciplinary workshop to synthesize recent advances in research on organic phosphorus across ecosystems; from land to sea and from the tropics to the Arctic.

The role of an enabling environment and soil organic carbon stock assessing and monitoring approaches.
Land degradation undermines the well-being of 3.2 billion people and costs about 10 per cent of the annual gross world product in loss of species and ecosystems services. Land degradation is defined by the United Nations Convention to Combat Desertification (UNCCD) as “the reduction or loss of the biological or economic productivity and complexity of rainfed cropland, irrigated cropland, or range, pasture, forest and woodlands resulting from a combination of pressures, including land use and management practices”.
It is recognized in Sustainable Development Goal 15.3: “By 2030, combat desertification, restore degraded land and soil, including land affected by desertification, drought and floods, and strive to achieve a land degradation-neutral world”. Land Degradation Neutrality (LDN) is achieved if new degradation is balanced by reversal of degradation elsewhere in the same land type by restoration or rehabilitation. LDN relies on action at three entry-points in the response hierarchy: avoid – reduce – reverse. Attaining LDN requires i) addressing land governance and creating an enabling environment for LDN, ii) monitoring Soil Organic Carbon (SOC) stocks one of three indicators for LDN.
In this session we want to address science based-evidence:

The 4th International Conference on Global Food Security addresses the topic of food security at all spatial levels from local to global, and from an interdisciplinary and systemic food systems perspective. It aims to better understand environmental, nutritional, agricultural, demographic, socio-economic, political, technological and institutional drivers, costs and outcomes of current and future food security. Interactions with contextual factors including climate change, urbanisation, greening the economy and data-driven technologies will be central. The conference addresses the triple burden of malnutrition: hunger, micronutrient deficiencies and obesity. It explores the state-of-the-art of interdisciplinary insight, addresses the trade-offs that occur – and synergies that can be sought –in transforming food systems. These are aimed at reconciling the competing environmental, economic or social objectives and outcomes towards achieving the Sustainable Development Goals at different levels across spatial and temporal scales.

Second International Scientific Conference on Climate Change. Vulnerability and adaptation of the agriculture sector to climate change in the Sahel and West Africa. 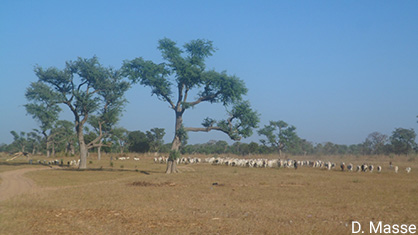 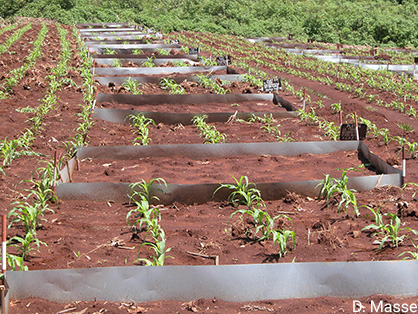 The themes that will be addressed in the STICS model symposium are relevant to all the researches carried out using the STICS model and, if possible, we will organize thematic sessions on the following themes: (i) tropical cropping systems, (ii) intercropping and ecological intensification strategies, (iii) carbon sequestration and greenhouse gas emissions, (iv) adaptation to climate change.. 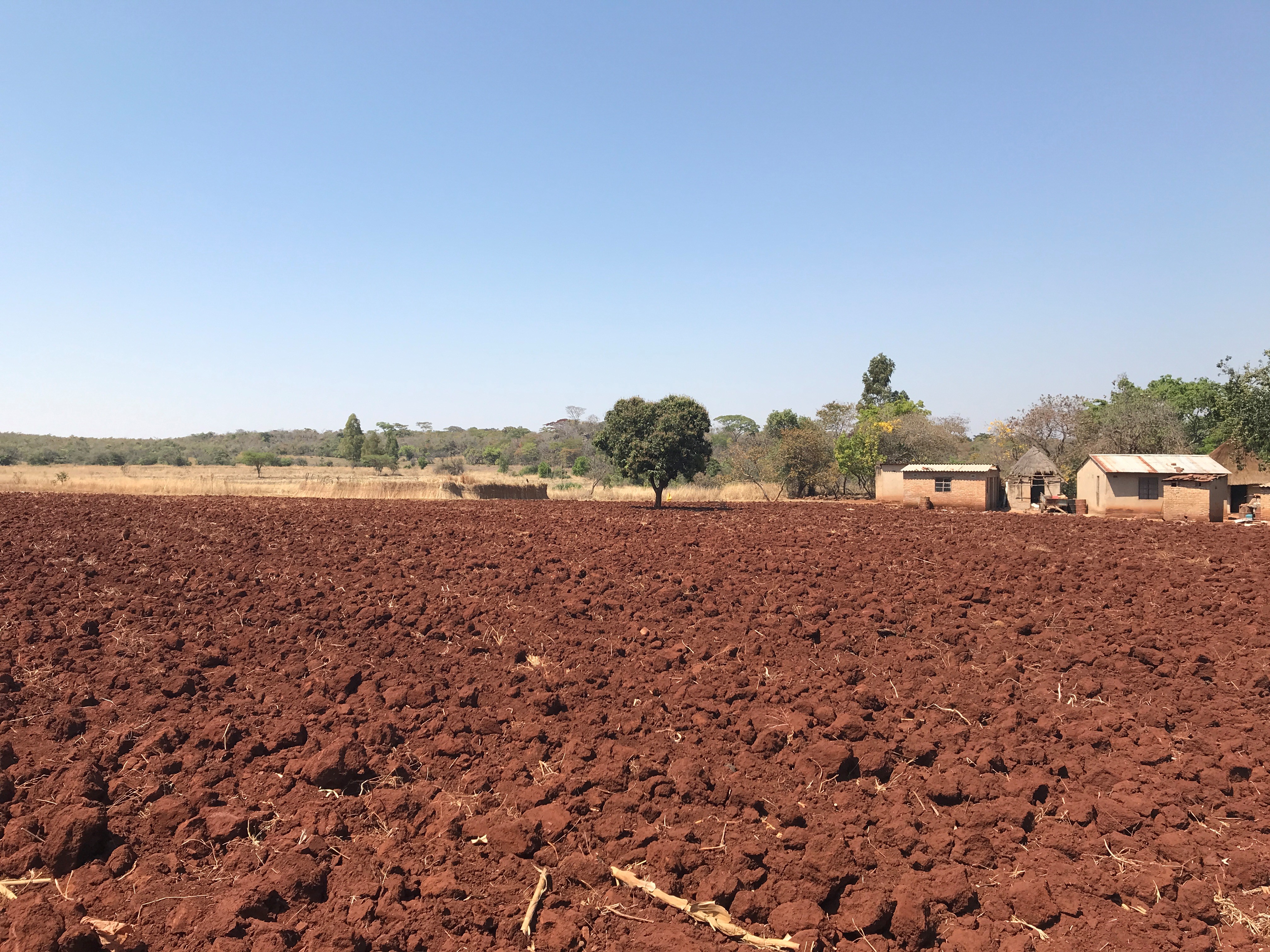 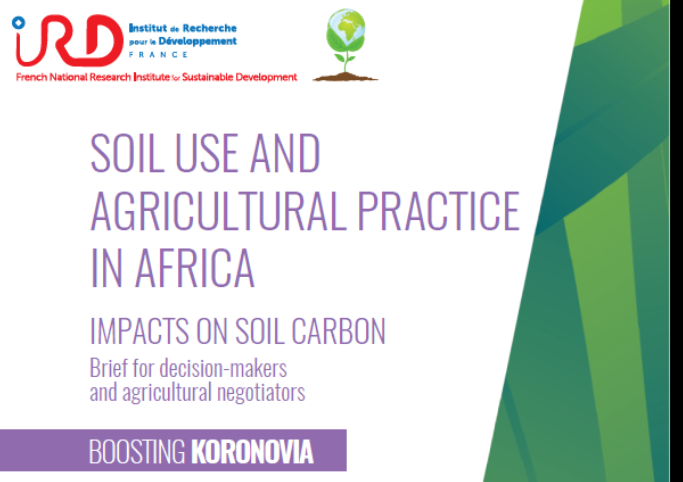 Organic carbon decomposition rates with depth and contribution of inorganic carbon to CO2 emissions under a Mediterranean agroforestry system.

Deep rooted crops for future food production: Can we use subsoil resources and deep‐rooted crops to produce more food in a sustainable way?

Oral presentation: Fate of root litter derived C and nutrients at depth: what are the challenges? 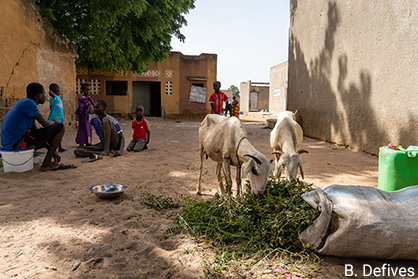 The objective of the Sustainable Intensification Conference (SIC/CID) is to present integrative approaches and research results aiming at improving agricultural productivity, mitigating environmental degradation and the effects of climate change, and contributing to the well-being and the resilience of rural populations. 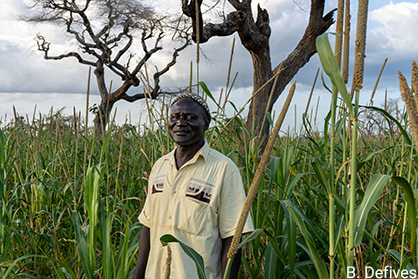 "... The PSIP-Seq2C organized the 7 October 2019 a side event during the international conference on sustainable Intensification (Dakar, 8-11 October 2019) and before the national agroecology days organised by FAO, Enda Pronat and ISRA, to bring together project leaders on agroecology and climate issues in the South countries to i) discuss with other stakeholders (NGO, public policy makers, etc.), ii) to clarify the scientific barriers to be removed, iii) and consider/construct concrete actions to be taken to respond to the challenges raised by the Seq2C on African contexts.." 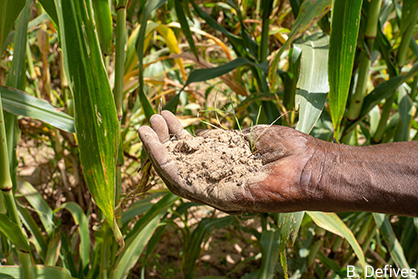 “The conference theme, “Soil Organic Matter in a Stressed World” has the dual objectives of better understanding and quantifying the functions that SOM sustains in both natural and managed systems, and understanding the stressors that impact on both its stability, and its ability to continue to deliver these key ecosystem functions.” 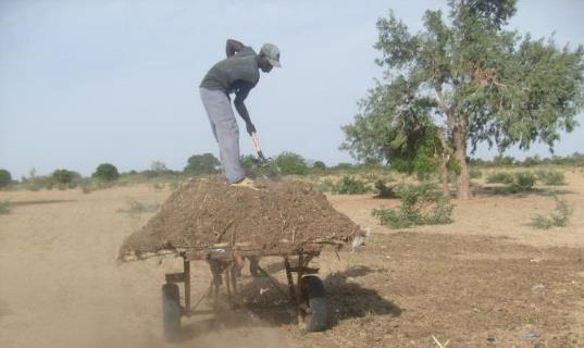 Abstract :Crop production is limited by low soil fertility in sub-Saharan Africa (SSA), particularly by P deficiency due to strong fixation by Fe and Al oxyhydroxides. Organic amendments are known to increase P availability in fertilizer and in such soils by different mechanisms. This study investigated the effect of adding farmyard manure (FYM) versus mineral triple super phosphate (TSP) fertilizer on P availability in different cropping systems. Field experiments were conducted in three succeeding summer seasons to compare two different upland cropping systems: a Bambara (Vigna subterranea)–rice rotation and a rice–rice system on a highly P deficient Ferralsol. Nine treatments including sole TSP at 0, 10, 20, 30 kg P ha-1 year-1, and sole FYM at 0, 10, 20, 30 kg P ha-1 year-1 (i.e. 100% FYM substitution), and combined FYM and TSP (FYM + TSP) at 20, 30 kg P ha-1 year-1 (i.e. 50% and 67% FYM substitution, respectively) were applied. Results showed that FYM treatments increased Bambara and rice grain yields compared to TSP treatment alone particularly in year three. Phosphorus uptake efficiency was higher in FYM treatments combined or not with TSP in year three of the experiment. The notable response to FYM was associated with increased agronomic efficiency resulting from additional C originating from the FYM with a low initial soil C content, (around 2%), and the effect of liming that reduced soil P sorption thereby improving P availability from FYM. Partial (67%) substitution of TSP by FYM increased grain yields of Bambara by 1.67 Mg ha-1 and of rice by 1.01 Mg ha-1 compared to TSP alone in year three at the highest P rate (30 kg P ha-1). The effect of FYM could be linked to inputs of C and nutrients from added FYM and to the indirect effect on soil physico–chemical properties including soil pH, soil moisture, soil biological activity, low P capacity sorption. This study confirms that application of FYM can help minimize rates of TSP applied in smallholder farms in SSA. 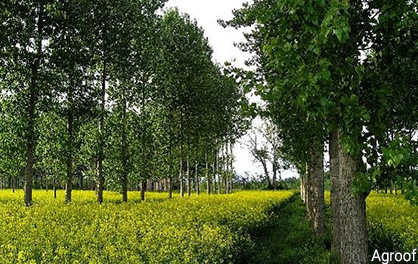 Abstract : Anthropogenic greenhouse gas emissions are largely responsible for the climate change we are currently living. This climate issue is doubtlessly the biggest challenge of our century, and probably the greatest challenge of our specie. Regarding carbon, public policies highlight the principle “avoid, reduce, compensate”. Soil carbon sequestration refers to the “compensate” part of that principle and seems very promising. Our work will review the literature, firstly about the economic and politic aspects of soil carbon sequestration, and secondly about the economic and politic aspects of agroforestry – an agricultural practice known for its high carbon sequestration potential. We then conducted ten semi-structured interviews with researchers and farmers to refresh and confront the literature. From this qualitative work, we propose a list of attributes for a future Choice Experiment that will aim to better understand what fosters or discourages farmers to adopt agroforestry. As far as we can say, our analysis suggests that farmers’ intrinsic motivations might play the most important role when choosing whether to adopt sequestering agricultural practices, and that these intrinsic motivations are not innate but culturally built through a self-raising-awareness process. Future studies are to be conducted to validate or invalidate our analysis. 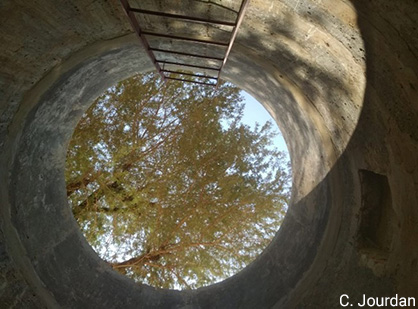 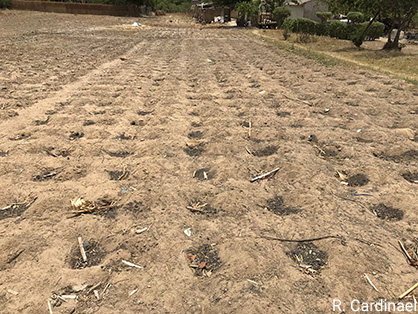 From the final report “… The discussion globally focused on changing storing practices, the environmental cost of storing carbon and its residence time, tools and methods to assess real time C changes, and the co-benefits of carbon storage and its links to food security. We also discussed methods of valuing C, interactions between politics, economics and science, the “4per1000” controversy… Likewise, the discussion emphasized the need to consider the specificities of each region and to be inclusive of all major stakeholders for a successful implementation of the initiative. The need for a global soil information service that could provide the data and analytical capabilities to support a scalable quantification infrastructure to measure, monitor, verify and forecast soil C stock changes and greenhouse emissions to support climate mitigation policies was emphasized …”

Storing 4 per 1000 carbon in soils: the potential in France 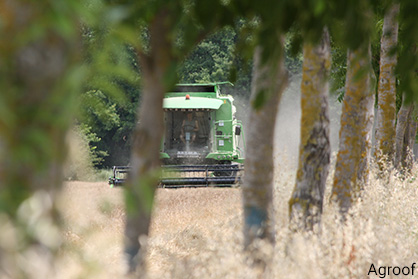 “ … it is possible to achieve an additional storage of +1.9‰ per year for all agricultural and forest areas. Compared to agricultural areas alone, this represents an increase in carbon stock of +3.3‰, while if we limit to the soils of crop fields alone, as their stocks are low, the increase in stocks reaches +5.2‰, which would also improve their fertility. The practices to be implemented (extension of intermediate crops, temporary grasslands, agroforestry, etc.) also provide benefits for water quality and biodiversity. On the other hand, some soils already have a high carbon stock. This is particularly the case for forests and permanent grasslands, where it is difficult to increase the level of carbon in the soil. The challenge is then to maintain and protect these stocks through practices that make them sustainable …”

Workshop on the 4 per 1000 initiative

a 10 minute movie was made by Bastien Defives, following the discussions researchers had, in a working group on farmers' perceptions and practices. 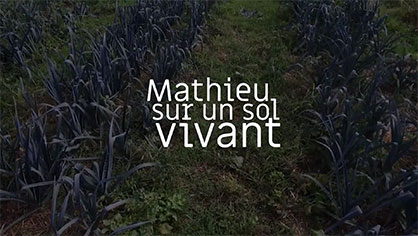 Farmers' perceptions and practices are at the heart of the action for carbon sequestration in agricultural soils, this is one of the conclusions of the researchers and stakeholders gathered in Sète in November 2018 around the initiative "4 for 1000: soils for food security and climate".
This film gives the testimony of a farmer, who cannot represent his entire profession on his own, given the diversity of situations and contexts. Mathieu Yon questions his entourage, research and decision-makers, about the climate change he is facing, the soil he is working to make more fertile and the practices he is trying to implement in "good understanding with the environment". By collecting his point of view, the film is part of the continuation of the Sète workshop and the dynamic of strengthening collaborations between researchers in the human and social sciences and researchers in the natural sciences. See the movie